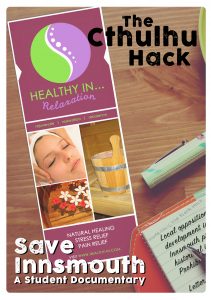 Not all information comes to your characters in the here and now. While, a character will roll a Flashlight or Smokes to discover something current, they can do the same to unearth an element of their past.

Flashbacks allow you to glean information from events that haven’t happened in the game yet, but have already happened during the character’s life.

For example, you want to find out who’s behind the development work on the Innsmouth site. The GM frames a meeting in the lobby of the University refractory. You play out the characters having a coffee and muffin when they see a guy hanging around with a clipboard under a banner at the end of the hall. They go and check and find that it’s a marketing rep for the construction firm with a 3D model of a new leisure resort with facilities that will be open to the university. The characters get into a bit of a heated discussion when they find the resort will be built on the site of a place of historical significance. The GM calls for the test and the player rolls a 3. They have the information – and they hold on to their current Smokes die.

This gathering of information isn’t a dry roll of the dice – this is a chance to run a short scene of actual play. Because it’s about gathering information, it won’t have lasting physical impact. You should avoid Threat in these flashbacks. You can have repercussions, like sparking unwanted interest or leaving evidence, but only as a result of the player stepping down a die where they’ve managed to roll a 1 or 2.

The adventure Save Innsmouth works exactly on this principle right from the start of the adventure. Old episodes of Lost might come in very handy here. As GM, you should open the game to Flashbacks, while also serving up fresh and immediate discoveries. They all drain the investigative resources of the party – but some of those losses are effectively in retrospect.

You can apply this principle to both Flashlight and Smokes rolls. You saw something; read something; spoke with someone at a conference; chanced across someone in a bar; or you chanced into a conversation between two people while rushing to get to a lecture. Play it out – giving the player time to get the information. At the same time, as GM, you should note any potential new motivations, hooks, complications, or looming threats.

If you can spin something half mentioned in the past into a threat immediately in the characters face in the here-and-now, all the better for impact and entertainment! Or, if you keep a note of a drop word or a half-glimpsed face, insert it later or repeat it as a motif, driving it home as a connection, perhaps, to the culprits behind a plot or the truth behind a terrible ritual.

You can pick up Save Innsmouth (Chapter 0) now for a one-shot contemporary adventure; or, grab The Haunter of the Dark for more thoughts on designing and structuring adventures.