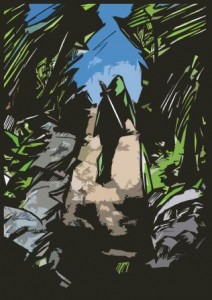 Seawater froths and bubbles, the surface bucking and splashing. Suddenly, a bright red disk of mottled and knotted carapace emerges, scuttling legs carrying the giant creature at incredible speed. Two Giant Crabs, streaming salt water and seaweed, great pincers snipping and snapping aggressively, loom over a gathering of fishermen busy securing their boats. As the fishermen back off, seeking to fend off harm with poles and oars, it becomes clear that each Giant Crab carries a rider – an orange skinned, gill-throated Merman.

The Stench of the Sea adventure is genuinely more of a module than a simple adventure. It might sound like an oxymoron, but it provides a confined sandbox environment for adventurers to interact with. The settlement of Brinwan lies on the coast, along a well-worn secondary route through the wilderness. Lessen Archer, the new money in the area, has high hopes to apply commonsense and business acumen to revive and accelerate Brinwan’s road to prosperity. Alas, there are forces at work that might make that impossible.

The book provides possible hooks for getting the player characters to come to Brinwan, including some brief scripted text for you to use or riff off.

A map of Brinwan shows the various key locations in the town – and the supplement includes a version for both the players and the GM, with key markers missing off the former. A general section outlines the environment around the location, the construction materials, sights, smells, etc.

Close to the sea, the smell of salt fills the air. When the wind blows down from the mountains, the smell of pine cones and fresh, clean timber competes with the tang of the brine, but never quite wins over. On the inward path along the western road, a building of darker, seasoned wood with a stone outhouse exudes aromas likely to attract travellers from miles downwind. The smokehouse takes much of the fresh produce from the settlement and slowly smokes it into morsels sought by men, rich and poor, from across the province. Between the smokehouse, the wild woods and the crashing sea, Brinwan can oftentimes overpower the senses leaving an unwary traveller quite breathless.

Overviews explain the presence of purpose of people and buildings, with greater detail provide for half-dozen key locations – like the Smoke House, Forge and Administrator’s Office.

The format of much of the reference material in the book makes them perfect for printing out as cards or quick reference notes. So, the locations – for example – include a description, who owns the place, who they employ, how they treat visitors, and key flavour like best selling items, potential for crime, services, prejudices, rumours and story hooks.

As well as Brinwan, a section covers the mine north of the settlement with an overview of mine features and possible hazards – suitable as a random incident table. Each hazard includes a short scripted description and then an explanation of where it might happen in the mine and how the hazard might impact those in the tunnels. The back of the book includes an innovative method of generating random mines using a piece of plain paper and a handful of paperclips.

Separate sections then deal with local caves, a lost tomb and the watery outpost of a local mer-tribe – allowing you to expand the adventuring potential of the supplement, with maps, motivations and key non-player characters.

Personalities of Brinwan serves as an overview of all residents, picking out key personalities, but also providing guidance to the common population, including suggested names, occupations, and the key influences and relationships. Like the earlier overview of the geography, Personalities provides six reference cards of key individuals, with a portrait, list of demeanor and quirks, background and notable possessions.

That all covered in the first half of the book, the suggested plotline for the adventure follows – with freedom to weave the detail, people and places around it.

Trinkets and Troubles provides more cards, outlining treasures, supplies, herbs, key NPCs and combative obstacles. The whole supplement uses an open and generic system to describe the abilities, powers and possessions of friendlies and adversaries alike. From this you can pull in suitable equivalents from your favourite system or use the detail as a means to improvise a story without recourse to heavy crunch or mechanics – whatever suits you best!

Adversaries include notes on Troglodytes and Merfolk, local wildlife – like Wild Cats and Cairn Trolls, creatures of the sea and dwellers from beneath the earth.

Finally, the book rounds off with maps – offering player versions as appropriate, a simple (very basic) system for running the games with the generic details provided, and some pre-generated characters with backgrounds, to get you going in a pinch.

The Stench of the Sea runs to 72-pages of A4 gaming, available as part of the Adventure Pack, with miniatures, or as a standalone Adventure, from RPGNow.

The Stench of the Sea Adventure Pack includes three sets of paper miniatures, along with the site supplement and adventure itself.

You get a full set of Dwarves, Troglodytes and Mermen paper miniatures, from Arion Games, all at a reduced price – and each of them plays a part in the events outlined in the adventure. Of course, you can also use them separately with your own games – and the paper miniature makes for an ideal throwaway accessory to your gaming.

Indeed, I generally got to events with a set or two cuts out and ready to use, just in case the battle mat hits the table or I just need a convenient way to quickly sketch out player locations. Each set comes with an array of different characters and classes in varying poses – and because they’re just strips of paper, they’re light and easy to keep to hand.