If we look too deeply into the roiling chaos of reality, chaos may look back.

I ran the Delta Green adventure Observer Effect for Free RPG Day. I had intended to run a couple of sessions, but on the day we didn’t start until an hour after I’d planned – and as it turned out, I ended up running the single session for almost 5 hours. Listening to an Actual Play of the adventure that ran to just 3 hours, I must have got lulled into a state of false certainty that the same would be possible on the day. However, I ran the game with six players, with the AP version ran with just three.

Observer Effect could work well as a two session investigation, but I think it probably has greatest impact served up in a single sitting. On the one hand, if you can get to just the right spot, it makes for a perfect and exasperating cliffhanger; on the other, the same spot might just be the perfect break to grab a beverage refresh and a trip to the loo.

Why did I run a Delta Green adventure instead of The Cthulhu Hack?

(Well, other than the obvious fact that I’m the author of TCH and therefore have a vested interest in promoted it!)

First and foremost, I wanted to showcase the essential selling point of TCH, which is the simple and flavourful mechanics, designed to chart the spiral into darkness and desperation as the investigators get closer to the truth. People did, indeed, go insane during this investigation – in fact, it was insanity that made for the satisfying denouement.

On Google+, I was asked:

… how would you contrast TCH vs DG ruleset? That is, what did TCH bring to the table that DG does not?

My response mirrored my initial intent in bringing a Delta Green adventure run with The Cthulhu Hack to the event:

I’m not suggesting that I can replace any other rule set. I believe The Cthulhu Hack offers an experience tooled to provide Lovecraftian research with a minimal, but potentially rich, mechanic for discovery and revelations. It has an extremely fast character generation that, nevertheless, offers differentiation between characters in the output. And that it intentional hews towards emulating the spiralling decline of Lovecraft’s own protagonists. It’s also incredibly easy to convert characters and scenario essentials from other systems to TCH.

I’d like people to consider adding TCH to their RPG armoury rather than replacing anything, as I believe it has a place and a value when time is short, a gaming session looms and you just want to play an investigation without needing specific pre-gens or tons of prep.

Having looked [at a specific page in The Agent’s Handbook handling skill use], TCH is more narratively forgiving in investigation. You’re not defining a deep knowledge of anthropology or Ancient Sumerian at the outset. Your investigative resource rolls test your capacity to find out what you know.

That’s the approach I always take when discussing the game with people at events or after con games. I don’t imagine that if you already play a game of Cthulhu-focused horror that you can pick The Cthulhu Hack and throw your favourite books away. What I envisage is that it should fill the same role as, say, Fate Accelerated as a go to system for a quick game, but with a little more focus to the type of game you’re going to run. Stripped down simple mechanics that do a job and get it going quickly. 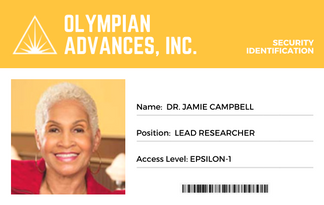 While I didn’t spend any time doing conversion of mechanics – handling that on-the-fly during the session – I did spend some time creating props, which I’m happy to share. I also created a matrix of clues, personalities and locations for quick consultation during the game – which I recommend. Once you’ve read the Observer Effect investigation itself, you’ll understand why. As this condenses a lot of material from the book itself, I won’t be sharing it – but essentially it just noted the key personalities, their personal tics and tells, their location when first met, and the key information they have to hand.

What I can share are some ID badges for the non-player characters, along with a map of the area and main location (ZIP file 1, 1MB), a bunch of random sheets for printing out and dropping on the table (at a specific point in the investigation) to momentarily entertain the players (ZIP file 2, 2MB), and a set of six pre-generated characters, based on the agents included in the excellent Need to Know Delta Green quickstart with matching ID badges emblazoned with appropriate cover story decals (ZIP file 3, 3MB).

On the day, I want to get the game going immediately by handing out characters on nice sheets with suitable logos, but The Cthulhu Hack can very much handle random generation of completely new characters. Here, I was aiming to wow with some bling – capturing the interest and attention of both newcomers to the game/genre and veterans alike. 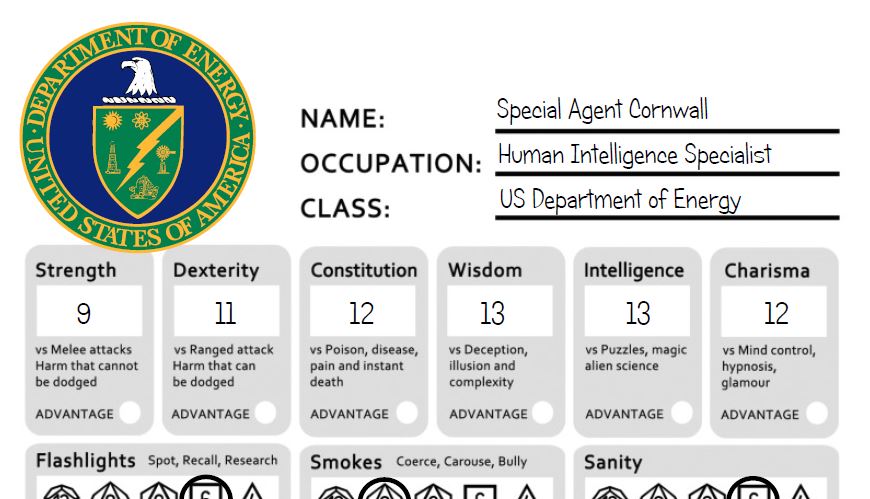 Observer Effect and Need to Know are adventures for Delta Green, released by Arc Dream Publishing.