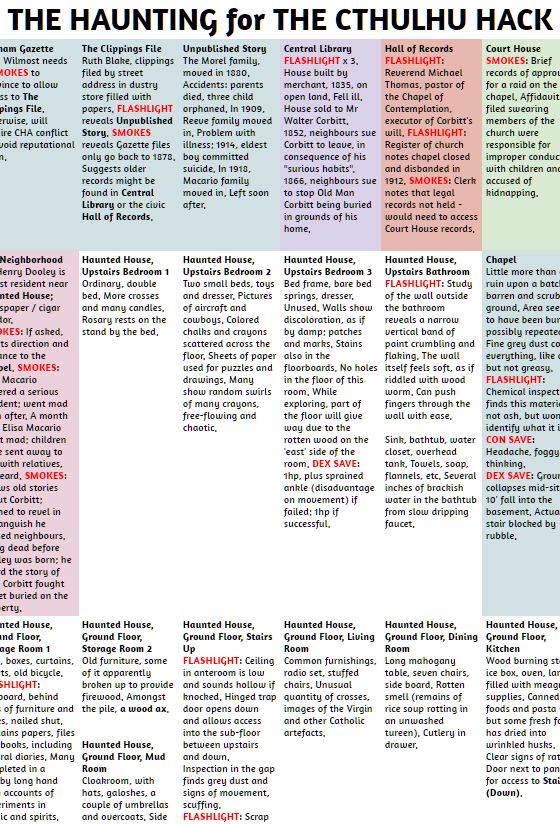 In running one of my playtest sessions for The Cthulhu Hack, I decided to use an old Call of Cthulhu classic – The Haunting – to see if I could handle a conversion.

You can get hold of the original for free as part of the Quick Start for 7th Edition or earlier editions. I remember playing The Haunted House (as it was called) back in the mid-80s, when we used 2nd edition Cthulhu, clustered around a desk in a classroom at lunchtime. My investigator managed to escape with his sanity but lost either an eye or an arm… I can’t remember which.

I wanted to make the conversion such that I could easily pick out the Flashlight and Smokes rolls that power the investigative side of The Cthulhu Hack. I also fancied making the notes a single sheet and giving the whole thing a bit of locational structure – so you start in the top left and work down to the bottom right. Location investigation across more than one cell of the sheet shares a colour and a bold title. The middle and bottom have the top, middle and basement of the house.

You can access the online version of the Cthulhu Hack-ed Haunting one-sheet adventure outline from Google Drive. I’m still fiddling with it, so thought a live document would be the best approach.

I’m not claiming this is the ideal way to write an adventure or the best way to do a Hacked investigation – but I wanted something that had a structure that would work for me. Running a playtest of The Cthulhu Hack I wanted to focus on the game mechanics and flow as much as anything, so I needed visually accessible information.

If you read through the original adventure and then check the sheet, I think that I cover the bases. I added one or two extra elements that I never needed to use (like the possibility that the final encounter might have an extra twist or that I’d need more combat). Just in case someone had played before, I wanted to have the option for a different cause and tried to pepper references to both amongst the clues.

Might just be an insight into the way my mind works – but I hope it also shows how I see Flashlights and Smokes work in The Cthulhu Hack.

5 thoughts on “The Hacked Haunting”