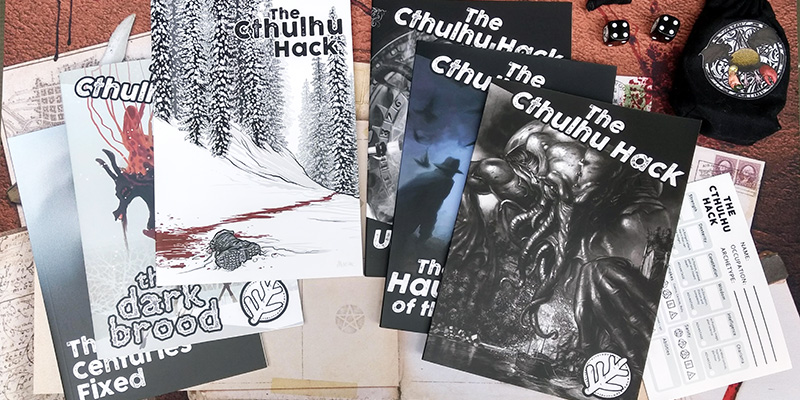 The association between The Black Hack and The Cthulhu Hack is a funny old thing. In the 3 years that both games have existed, an explosion of other supplements and expansions of the former have appeared. In the meantime, TCH has drifted along a path of its own.

What does that mean?

It means that many elements of The Cthulhu Hack are backward compatible with The Black Hack and other games of The y Hack type (where y is an indeterminate take on the core TBH), but I never really write them to work without thought or due consideration. I’m not including that sort of note in the material associated with the game—I’m not declaring anywhere in the core game or supplements that they work out of the box with The y Hack .

I do declare, in a general sense, that The Cthulhu Hack material can be run with other Cthulhu game systems and that you can use other Cthulhu game system supplements with The Cthulhu Hack. Again, I’m not declaring compatibility—you have to do an amount of work equal to indeterminate value n. You can use The Haunter‘s investigation structure and story mining for anything, but something crunchier might need a moment.

I have run scenarios from Call of Cthulhu, World War Cthulhu, Achtung! Cthulhu, Delta Green, Trail of Cthulhu, Bookhounds of London. Cthulhu Dark and others on the fly. Aside from reading the material in advance, I did nothing much else except make the sort of prep notes I do for any other adventure I GM.

On the other hand, if you lifted the Investigation Resource mechanic or Special Abilities from The Cthulhu Hack and used them in a game of The y Hack, you would have to give some thought to the process. TCH has no levels, so anything that assumes the use of levels probably won’t work at all—or at least needs some thought. TCH handles advancement through investigations survived, but that isn’t the same as levels, per se.

Creatures from The Cthulhu Hack will probably work, but again—some of their Abilities might warrant tweaking to make them more potent against a gang of leveled characters.

I hope that makes sense—and that you’re taking advantage of DriveThruRPG’s Christmas in July to pick up all manner of y Hack supplements and material, including The Black Hack and The Cthulhu Hack.

And if you’re up for new material or stuff you can convert with an amount of work equal to indeterminate value n, pledge your support through The Cthulhu Hack Patreon for as little as $1 a month.