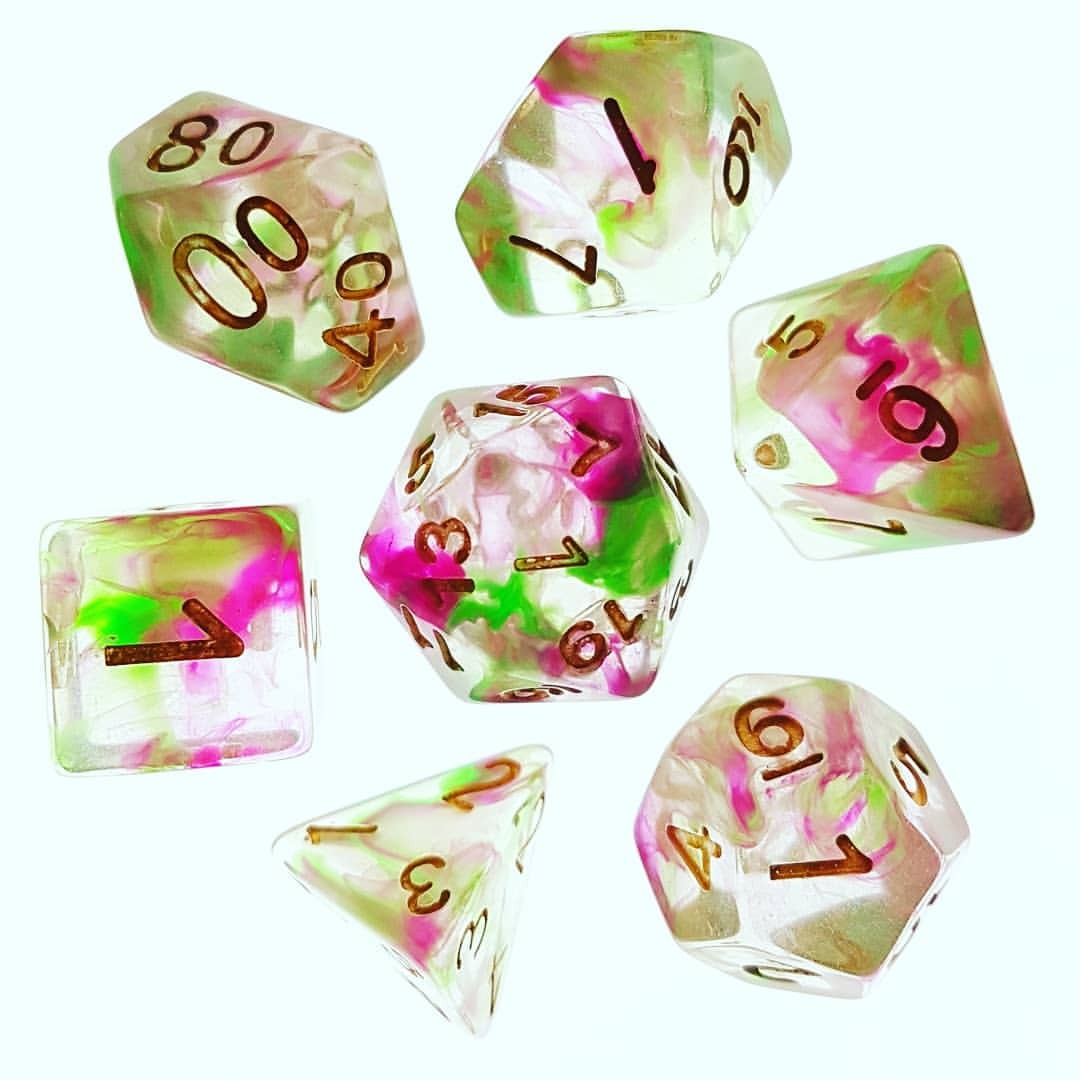 At the heart of many tabletop games lie a handful of dice. When you write a game, I propose that you should keep it simple, especially as a self-publisher or small scale game company, and stick with dice – because no one wants to spend money on something weird and wonderful for a game that might only play occasionally. What use would you have for tokens or cards keyed to a specific game – and why, as the publisher, would you mess with production and possibility of getting stuck with unsold stock?

In the early development of The Dee Sanction, I had a notion to use almost anything to make the character generation and record a bit different. I had tokens, I had character cards, I had a Tarot deck. In the end, it seemed to me that if I asked for any of those things, I might be asking for something that the table didn’t have to hand. Admittedly, they might not have dice either – but, I think you should feel relatively safe that a tabletop roleplaying game with a dice mechanic can be viewed as a fairly standard thing.

I was pleased when I ran a game of The Cthulhu Hack at Tierra de Nadie (in Mollina, north of Malaga) that someone commented they liked the fact that the game used a whole polyhedral set. I mean, it was both interesting and a little strange to get that feedback, but I guess it’s a truth that we’re not sticking to all the dice anymore. There are games that use just one die, or one type of die. If you’re Fantasy Flight, you might even get away with using some really odd dice. Both TCH and TDS use a whole polyhedral set – and, oddly enough, they use them all slightly differently.

In The Cthulhu Hack, you use the twenty-sided dice for handling Threats; the rest of the dice, you use those for Resources. You don’t use a d20 for Resources (normally). And you never use the lower-sided dice to figure the success or failure of a Threat. By the end of a session, you will have used all the dice, probably, some more than others – especially when you’re kicking off the use of a high value (12-sided) Resource. This division of purpose means that when I say to save against a Threat, there isn’t a doubt about what die to pick up.

When it comes to The Dee Sanction, the status quo on dice won’t change much, though I intend to include some alternate mechanics. Ultimately, if you just use dice, the game will play the same way – but there will be the occasional option to use a deck of cards, for example, when determining your character background, as if all the players draw a card from a single deck you manage to perform an act of randomisation without the possibility of duplication. Yes, you might want be OK with two porters or courtiers, but using the cards means that won’t happen unless you specifically choose to not randomise. Or use the dice and allow it.

I suppose for some players, when you come to a game and you have spent the time picking our your favourite dice, it can be disappointing to find that the game you’ve signed up for out of interest uses only one type or none at all. Why did you go through all that ritual effort of purification and orientation for the last week, bathing them in holy water and hanging them from the mantle of your fireplace, only to find the careful balance of perfection instantly disrupted… or dissipated by disuse?!

On top of that, if you just use a standard set of dice, you don’t have to spend time explaining how to use them. I mean, I like the dice mechanic for Star Wars and Genesys, but that thing does take a while to bed in or necessitates a reference chart that won’t stay memorised for long (or at least not in my experience). When you say, roll a twenty-sided die, that doesn’t need any explanation (well, it did in Spain, but only because i tried to explain the singular and plural versions, die and dice, and how it had fallen into disfavour).

Once you start adding cards and tokens, the tabletop might start looking more interesting and colourful, but you also generate an overhead of explanation. At a convention, that’s time you could be spending playing the game. I have found with systems that use more than a basic dice mechanic that I kick off the session and explain when I need it – aware that this will mess with the flow and immersion, but conscious that time’s of the essence. I find that this works well because you might find by the end of the session you have managed to get by without using all the mechanics – which would have been time wasted if you had explained them all upfront or created a comprehensive reference sheet before the game.

There’s room for innovation in gaming without worrying about weird and wonderful gadgets and tools at the tabletop. If you want to wow, find a strange and satisfying mechanic. By all means, you could consider using some strange device, like weird dice or colourful tokens, but I think it’s important to keep the core game working without them. And, it would seem, some gamers find that simplicity reassuring and satisfying, because they know when then sit down and play your game, they’ll have the chance to use their “special dice” they’ve spent so much time choosing in preparation for a game.