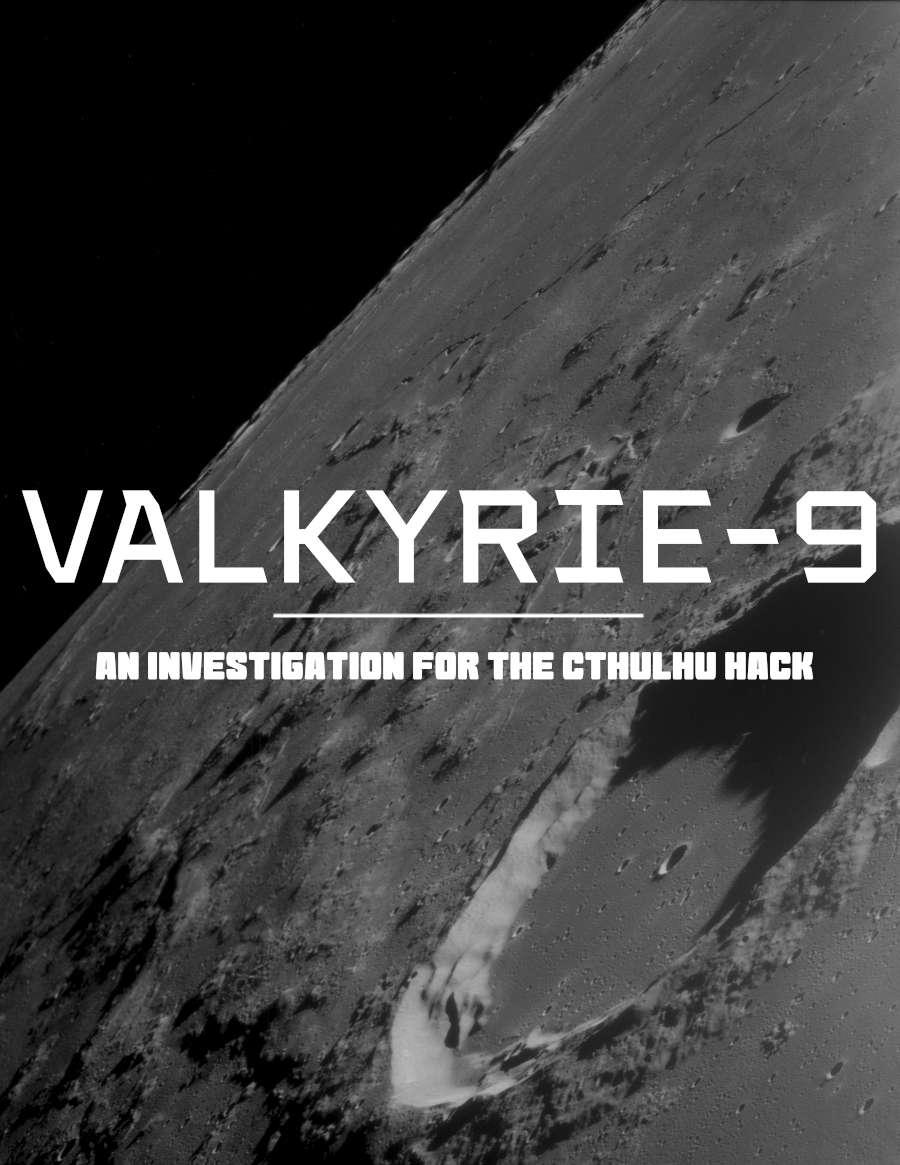 This weekend sees the release of a new investigation, Valkyrie-9. After a bunch of playtesting sessions, the time seemed at hand to set the adventure loose on the unsuspecting public. I had a lot of fun running the adventure across several events, each time with a completely different experience and outcome.

Valkyrie-9 finds the players taking on the roles of support drones on a Moon base experiencing massive power and systems failure. Emerging from re-charging into a clear emergency, they have to piece together the thread of events and seek to restore order.

However, something I heard around the sign up sheets was – “I don’t do robots” or “I don’t do science fiction.“

There’s not much I can do about the whole business of not wanting to play a mechanical drone, beyond asking, “Why?”

Role playing games constantly ask that you put yourself in the place of an unfamiliar character with motivations and beliefs that cannot possibly map to your own.

In this instance, the adventure is about the investigation and the strange situation – but the GM can also reinforce that these drones are advanced and highly capable constructs. Think R2-D2 from Star Wars or Huey, Dewey and Louie from Silent Running – or somewhere between the two.

It’s a one-shot, so they’re not committed to running an artificial character long term – and little about the character imposes restrictions on how the player plays them. Yes, they won’t be engaging in emotional responses or spawning some budding romance, but they’re not cold and indifferent. The drones have been around the Valkyrie site for almost two years and spent time in the company of the crew for half of that; they’re stalwart companions with a vested interested in resolving the current emergency.

Is the year 2073 science fiction to begin with? Or simply Near Future?

Many players expect all Lovecraftian tales to take place in the past – which probably represents a more alien environment that 50 years into the future! The GM selling that time difference must surely be simpler than understanding life 100 years in the past?

If 2073 causes genuine consternation, you could run the adventure in 2020, using a blend of alternate timelines and a healthy splash of real world conspiracy theory.

While one conspiracy suggests that the whole landing on the Moon business never happened, another suggests that visits to the Moon never stopped in the Seventies.

While we see efforts to colonise the Moon as works in progress or simple pipe-dreams, others believe that the apparent loss of interest in lunar exploration amounts to nothing more than a cover-up for a thriving Moon community, possibly funded by more than one Superpower.

In that case, set the investigation in an alternate now, where colonisation of the Moon continued to fascinate the Superpowers and their scientists, but the efforts became secret. It might even tie in more effectively as a Lovecraftian adventure that what should be in plain sight has been obfuscated from the masses.

Perhaps the Valkyrie project seeks to find more than just rare minerals – it might have an imperative tied into the imminent collapse of Earth’s eco-system, seeking sources of minerals, water, power or other resources.

Valkyrie-9 is available to download, as a PDF, from DriveThruRPG. The investigation will also see release in print through All Rolled Up.