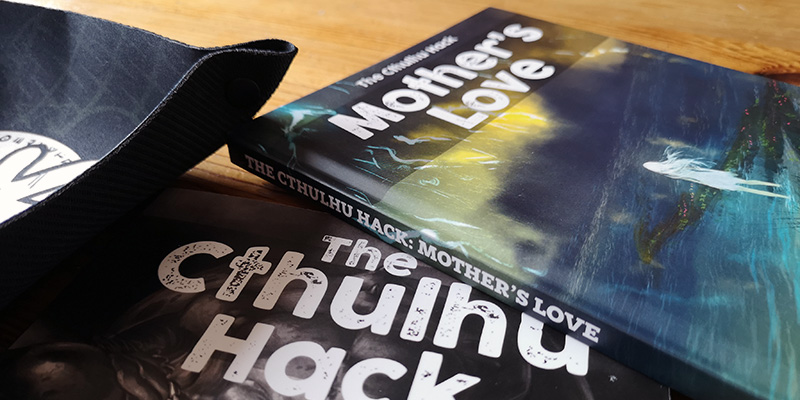 All Rolled Up have just taken delivery of the new hardback investigation collection for The Cthulhu Hack—Mother’s Love.

A 76-page collection of three investigations, written for The Cthulhu Hack but usable with any system. The book is hardback with a red ribbon bookmark, with a wraparound cover by Wenqing Yan.

The collection of three brand new investigations are all set in the late 20th and early 21st Century.

Deep Roots – In 1950s Canada, officers of the law and Children’s Services investigate a double murder and kidnapping that seems to connect back to an abandoned orphanage, in the backwaters of lumber country.

Gift of the Flesh – A team of animal activists seek to infiltrate the abattoir of a company growing rich on the sale of luxury meat products, with evidence of shady practice and possible bribery of European food standards regulators.

Ggantija – In celebration of the 400th Anniversary of Shakespeare’s Death, theatre director Peter Catterick organises a special performance of The Tempest held in the Neolithic Temples at Xaghra. But rehearsals descend into dark events and suddenly the actors find themselves pursued by something far worse than critics or paparazzi.

All Rolled Up has posted Mother’s Love up in their web store. Copies will also be available wherever All Rolled Up/Just Crunch Games attend conventions in the UK.