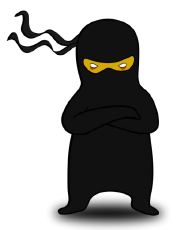 Ninjas! Their very name conjures images of black clad, highly trained assassins. Or pictures on the internet of a bunch of empty chairs with captions like “Ninja convention LOL”. Now, the mystique, the power, the meme can be yours to use as you see fit.

Ninja – Silent but Deadly is more than just a game. It’s a prank delivery system. A tiny little piece of tabletop gaming art. A meta-game to be played in the background, silently, with ninja like skills.

There are several ways to use these cards and this game box that are listed here, and most likely a hundred more that have not been thought of yet. Here you’ll find four suggestions on how to use Ninja! – Silent but Deadly.

You’ve gotten your gamer friend a gift! A brand new game called Ninja! The box looks promising but there’s not much in the way of description on it. When your friend opens the box, they’ll find… nothing! Just an empty box and their creeping sense of suspicion and indignation.

The next part is up to you. In an hour, a day, a week… even a month, one of the You Lose! cards originally included in the box will suddenly appear where your friend can easily find it. They’ve just lost at Ninja – Silent but Deadly!

Perfect for a game night, casual party or other social gatherings. In this meta-game all of the players are aware of Ninja! – Silent but Deadly. Hand out one “You Lost!” card to every player. Each player has until the end of the game session to slip their card somewhere where another player will be forced to find it. Amongst other cards of a game currently in play, in their chips or what have you. Be creative! When a ninja card it’s found by another player, that player is out.

A spin on Ninja Advance and Hardcore (below), each player gets a “You Lost!” card and signs it with their name. Players may not give the cards to any of the other players for the first hour after handing the cards out – which means they can’t plant them anywhere in that time either. Starting after that hour, each player must secrete their card somewhere out of plain sight with the intent of catching one of the other players in the group.

As with the standard Advance game, you need to be creative. You can’t simply place the card in the middle of the entrance corridor to the convention or suspended over the doorway to the only loo – that’s neither creative or honourable, and ninja pride themselves in a job well done.

If a player uncovers a card, they have to honestly report the discovery. As with the Hardcore game, you have the option of introducing a scoring system to award genius and originality. You also might give players more than one card to allow flexibility and some chance of success, especially in a particularly large venue.

Use the same setup as Ninja Advance, but with this twist. Players can accumulate more than one “You Lose!” card during the course of the event. They can also distribute more than one, should they have them. Again, be creative! The player with the least amount of You Lose cards at the end of the event wins. Cards cannot simply be thrown away, or put into a pocket. They must be distributed in a way that another player is sure to find them.

The Ninja! – Silent but Deadly game that may never end. Distribute one “You Lose!” card to each player. Players may not give these cards to other players that day. Starting 24 hours after each player has received their cards, Hardcore Advanced Ninja Advance begins!

It is up to each player to get their “You Lose!” card to another player. It must be given to them in a way in which they won’t know it’s a “You Lose!” card until they are holding it in their hands. Wrap it up as a birthday present, include it in a seemingly still sealed CCG booster pack. Be creative in how you get it into their hands!

Points are awarded by the person who’s received the You Lose! card based on the following scale.

Always play nice. Never put anyone at risk of injury when playing Ninja – Silent but Deadly. No running in the corridors or using the cards as ninja stars in public places. Equally, don’t risk personal injury by trying to put a card somewhere dangerous nor risk criminal charges by seeking to put a card somewhere  that involves breaking and entering!

Be careful. Be sensible. Have fun. And – most importantly – never lose!

Ninja! – Silent but Deadly is a game by Benjamin Gerber. Much of this text mercilessly lifted from the game notes – and channelled through the medium of dance (oh, and Creative Commons).
Published by Troll in the Corner