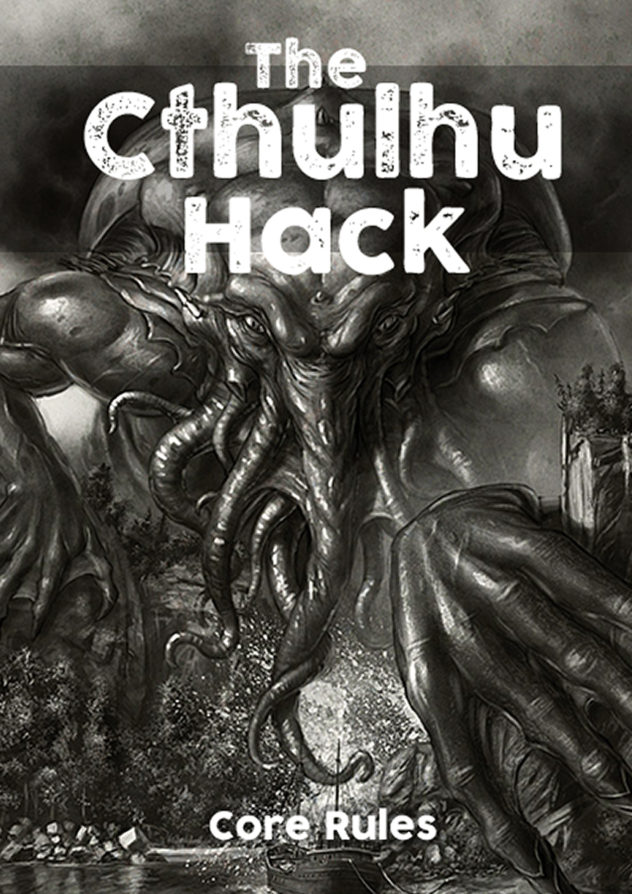 The Cthulhu Hack is a tabletop role-playing game of investigative cosmic horror set against the backdrop of the universe Howard Lovecraft created in his classic stories.

While the Cthulhu Mythos has expanded significantly in the century since his tales first went to print, The Cthulhu Hack draws on that original source material, which you can freely download in all its public domain completeness in ePub and Mobi format (thanks for the format to @cthulhuchick at ArkhamArchivist.com under CC BY-NC 3.0 credit to Squid Studios).

Both involve throwing one or other of a standard die from a set of polyhedral dice – you’ll need everything from a four-sided through to a twenty-sided. And the players get pretty much all the dice rolling fun – so they’re the instruments of their own doom.

Everything you do in the game that involves a dice roll involves either Threat or Resource, and The Cthulhu Hack uses these in interesting ways.

For example, your characters ability to find clue depends on two Resources – Flashlights and Smokes. Instead of a long list of skills, you have just two dice to do everything from spotting the hidden and researching in a library to bribing a guard and knocking back sociable pints in a local pub. It not only means a simple game to teach new players, but it also makes it very easy to convert adventures from other systems on-the-fly.

(And because the core system comes from David Black’s The Black Hack you can bring in elements from any other game built upon that remarkably flexible base. Or you might convert any of a number of investigative and/or horror adventures written for Dungeons & Dragons or it’s own varied derivatives, as The Black Hack owes it’s heart to that old school tradition)

You can probably read The Cthulhu Hack in 20 minutes, explain it in 5 minutes and have characters ready on the table before you’ve used up another 5! Half an hour from picking up the book to playing the game with friends as investigators into the unknown fighting cosmic horror and nefarious sects of obscure unearthly beliefs.

No previous experience of the Cthulhu Mythos required as the back of the book includes a three-page Mythos 101 for those unfamiliar with the original tales. And, “Ordinary people dragged into strange and supernatural situations certain to test the mind, muscle and mettle,” covers the rest.

Check out an example of adventure conversion of The Haunting.

No previous experience of the Cthulhu Mythos required! Includes a Mythos 101 for those unfamiliar with the original tales.

Eric Dodd – “I welcome the appearance of The Cthulhu Hack to the crowded Lovecraftian RPG mantlepiece. If you liked the simplicity of Cthulhu Dark but felt you needed a few more tools and levers to build a game around, without having to track 40 or 50 skills or detailed weapon statistics, then The Cthulhu Hack might be just what you’re looking for.” (RPGGeek)

Mike Hill – “The bottom line is that I will actually play this game. I download a lot of projects that never make it off the hard drive.” (The World According to CARP)

Paul Maclean – “It’s an interesting, nice little light system… If you want an entire roleplaying game for about £4 in print – The Cthulhu Hack… it’s worth a shot.” (Cthulhu Breakfast Club)

Available from DriveThruRPG, Lulu and All Rolled Up.