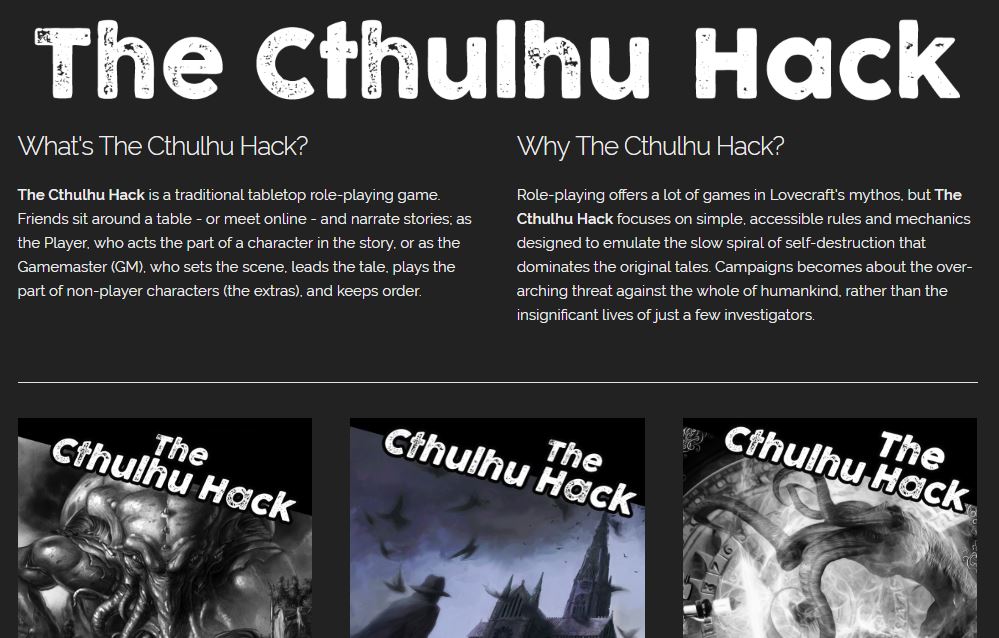 The Cthulhu Hack had a 2nd birthday last month and the line continues to grow. At the core, we have the three core books, along with two books of adventures, and other books filled with campaign materials, like The Dark Brood and Convicts & Cthulhu. Good moment for an update.

It seemed like as good a time as any to put together a separate site – using the cthulhuhack.com domain – to showcase the books and link to the sources from which you can buy them. That means I can focus the content here on development articles, news, event updates and other such posts.

Right now, the site has the main six books, but I’ll be adding the other materials soon. Each item has a short summary on the content and then buttons to take you off to where you can get hold of PDF or physical copies.

If you would like to see any other information on this site or want to see the books available through other channels, drop me a note through the Enquiries link.

With The Dark Brood released in time for UK Games Expo, my mind turns to the close of the year when I plan another physical book release. I think a further PDF only product might be possible along the way, but fully expect the next book-in-hand supplement to arrive by late October, in time for Spiel.

At the moment, I have more than one product jockeying for position. I would ideally like the October release to be another set of investigations like the award-winning Three Faces of the Wendigo. However, I also have a supplement in progress about more non-Lovecraftian campaigns, steeped in pulp and magic, and a revision of the historical Australian setting book Convicts & Cthulhu.

I’m also open to suggestions – and even offers of writing talent! – from any interested parties. If you have an idea and want to pitch it for consideration, drop me a note through the Enquiries link.

At this point L’Affaire Deluze by Les XII Singes doesn’t really need me to promote it, as the crowd-funding for the French edition of The Cthulhu Hack and associated campaign materials and adventure stormed through the basic target in about a day and now closes in on the 30,000 € stretch goal of a global map for the campaign.

If you’re up on your French and would like this sumptuous package of goodies, including maps, play aids, art book and more, head on over to Game On Tabletop to check out the details.

On a side note, the heart of The Cthulhu Hack arose from the core mechanics of The Black Hack. More than two years down the road, David Black and Peter Regan of SquareHex have the Kickstarter for the Second Edition up and running – and you might want to drop over to see what they have to offer.

The Cthulhu Hack has found a route of its own in the meantime, so don’t expect a sudden and massive change to the mechanics in the current edition when the new Black Hack comes out. Paths have forked, but obviously once the game lies in your hands you can mix and match whatever elements work best for you.

Heck, I’ve been eyeing up giving The Mecha Hack a read to see whether I can cleanly and simply merge with TCH for some giant robot versus the Great Old Ones world-wrecking action…