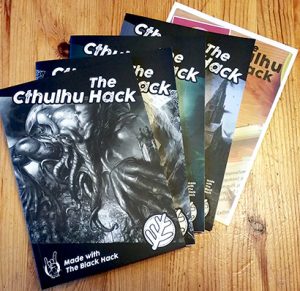 I think that 2016 warrants celebration because of everyone reading this – and many who aren’t – who picked up a copy of The Cthulhu Hack or one of the supplements and adventures that followed.

The success of The Cthulhu Hack took me somewhat by surprise. It also filled me with a sense of creativity and energy that saw 200-pages of content crafted over a period of 6-months.

That’s a massive increase of sales over previous years – any period, for that matter. Again, I really appreciate the support, the feedback, and the reviews – which I have taken onboard and used in shaping products that followed. 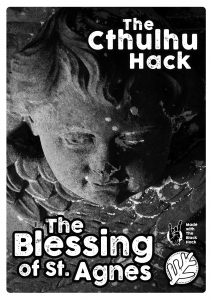 I am aiming to either write or commission an adventure per month in 2017, except those months where I release something else.

At the moment that “something else” includes Unspeakable Hacks – or Unaussprechliche Hacken, whatever I end up calling it – (optional rules for Cthulhu Hack), The Blessing of St Agnes (an adventure for TCH or compatible Hacks), Save Innsmouth (a collection of connected adventures linked to the eponymous seaside town) and The Cthulhu Hack Character Cards to speed and expand character generation.

I also plan to write a version of The Dee Sanction for release by mid-year, my long-gestating game of Elizabethan espionage and covert Enochian intelligence. That will include a short adventure and another adventure will follow, based on the games I’ve run playtesting the concept over the last two years.

Thanks again for all your support – and a Cthulhu Hack Fhtagn for 2017.